Finding it difficult to practise for the multiple choice section of the QCE Physics External (EA) without many practice questions? Well, we’ve come up with a bank of multiple choice questions so that you don’t have to keep doing the same past paper over and over.

These 25 practice questions also come with the answers, so you know if you’ve gotten questions right, or need to revise certain things.

Excited to start studying? Let’s get into the questions!

The definition of acceleration is the rate of change of

What is the magnitude of the resultant vector?

What does the following Feynman diagram represent? 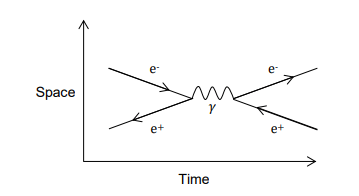 (a) Neutron Decay into Proton

A circular loop, which shrinks from a radius of 5cm to 3cm, is threaded by a magnetic field of strength 4mT. This process occurs over a time period of 5 seconds. Calculate the EMF.

What is the magnetic field strength of a solenoid with a current of 5A and 5000 turns?

A proton and and an electron are a distance of 10cm away from each other, what is the acceleration felt by the electron?

The definition of relativistic time is:

(a) The time measured from a newtonian frame of reference

A ball is projected at 4 different angles, 80°, 55°, 45° and 10°. Rank in  ascending order which angle will produce the largest horizontal displacement for the ball.

Two planets experience a gravitational force of F at a distance of r from one another. What distance do they need to be from each other to experience a force of  1/2F?

A particle undergoes uniform circular motion, the path it traces has a radius of 3cm and the particle takes 0.5s to do a full revolution. What is the particle’s acceleration towards the centre of the circle?

A 2m wire carrying a current of 3A is placed at some angle theta in a magnetic field of strength 6T. It experiences a force of 25N. What is the angle between the wire and the field to the nearest degree?

What is the angular momentum of an electron in the third energy level?

A plank of stationary length 3m is moved at a speed of 0.8c. To what length does the plank appear to a stationary observer?

If an object has 50J of potential energy initially with 30J of potential and 20J of kinetic energy after some timestep, what was the initial speed of the object?

How far does an object travel if 50Nm of work is done it with a constant force of 10N?

The definition of a gravitational field is:

(b) An area where an acceleration of 9.8ms-2 is experienced

(c) A region of space around a mass within which a force is exerted on other objects with mass.

(d) An attractive force felt between two bodies with mass.

A ball is projected at an angle of 20° to the horizontal with an initial horizontal velocity of 25m/s. What is the ball’s initial velocity to the nearest 1 decimal place?

What is the magnitude and direction of the electric field produced by an electron at a distance of 5cm?

A particular step-up transformer is set up in such a way that the voltage is doubled. The primary voltage is 50V with 100 turns. How many turns are on the second coil?

A circular loop of radius 10cm experiences an EMF of 25V as the magnetic field it is in changes from 5T to 3T. How long does this process take to the nearest 5 seconds?

What is the maximum wavelength that could possibly be emitted by a surface at a temperature of 473.15K as predicted by Wien?

Which of the following is one of Newton’s laws?

(c) All planets move around the sun in elliptical orbits, having the sun as one of their foci.

What is the orbital radius of an asteroid that takes 3 days to orbit the earth?

If you’ve been searching for other resources to help you study for QCE Physics, you should check out our practice questions below:

Are you looking for some extra help with the QCE Unit 3 & 4 Physics External Assessment?

We have an incredible team of QCE Physics tutors and mentors!

We can help you master the QCE Physics syllabus and ace your upcoming Physics assessments with personalised lessons conducted one-on-one in your home or online!

To find out more and get started with an inspirational QCE tutor and mentor, get in touch today or give us a ring on 1300 267 888!

​​William Bye is a Content Writer at Art of Smart and is currently studying a Bachelor of Advanced Science with Honours (majoring in Physics) at the University of Queensland. He was part of the very first cohort in Queensland to go through the ATAR system and wishes to help other students to make this journey as easy as possible. Will enjoys his time playing guitar in a band with his friends and hopes to continue balancing his science and music for many years to come.

Everything You Need to Know About the QCE and ATAR