How to Analyse Keats Poems and Bright Star for HSC English

Need to do an in-depth analysis of Keats and ‘Bright Star’ for HSC English? You’ve come to the right place!

We’re going to walk you through the connections Keats Poems and the movie Bright Star have to the Texts and Human Experiences Module.

Note: Throughout this episode, we’ll be using the Keats poem Grecian Urn as an example.

PLUS, we’re also going to give you a rundown of the content, context, and themes within these texts!

So, what are you waiting for? Let’s get started!

Check out our analysis of Keats and ‘Bright Star’ below!

Bright Star responds to Keats’ poetry, both as a loving homage which reflects similarities and as a critique, which looks at the world from a different point of view.

Bright Star reflects many of the aesthetics of Keats’ poetry through its long shots of pastoral scenes, and awe-inspiring natural landscapes. However, where Keats’ poetry is all about trying to understand love and death in terms of the transcendental or spiritual, Campions’ film is far more down-to-earth.

Her film emphasises the physical and emotional aspects of love over the metaphysical. Keats grapples with the finite and fleeting nature of life, and he attempts to comprehend it through spiritual and eternal themes.

Campion deals with the same subject matter, but in contrast, she ultimately suggests that life is finite and death is tragic and unbearable.

Grecian Urn is a poem of five stanzas which describes in detail an urn from ancient Greece.

Keats uses the urn as a vessel to explore how its images of the physical, fleeting world (young virgins and trees in springtime) can be made eternal. This acts as an extended metaphor for his fear of death, as he tries to capture and eternally hold that which is fleeting.

Bright Star tells the love story between John Keats and Fanny Brawne from the perspective of Fanny. It follows their meeting, the death of Keats’ brother, their love, their separation, their engagement and finally Keats’ death.

Keats wrote during the Romantic period, a literary and artistic movement that focused on imagination, the natural world, childhood and idealism. The movement was in response to the industrial revolution, which saw an increased number of people living in overcrowded cities, polluted with smoke – the Romanticists advocated for a revival of the natural world to combat this dismal environment.

The Romanticists were also responding the Neo-classical movements in literature, science and architecture which valued simplicity, symmetry, order and reason.

In contrast, the Romanticists values the wild, untamed elements of art and human nature.

Bright Star is influenced by the real life context of the Romanticists and the life and death of John Keats.

Its treatment of this subject matter is influenced by a growth in realism in cinema, which aims to give an authentic portrayal of life (rather than an idealistic one, like the Romantics aimed to give).

Furthermore, the film is influenced by the feminism of the 20th and 21st centuries, which focuses on making women realistic and multidimensional, essentially real people. This again contrasts with the idealistic and sometimes one-dimensional lens through which women were often viewed in the Romantic period.

Here are a few themes that you may choose to work with in your analysis:

When doing our analysis, we need to have a technique example and effect.

You can do this in what we call a TEE Table.

For our analysis, we’re going to look at Keats ‘The Grecian Urn’ poem and compare it with the relationship between Keats and Fanny in ‘Bright Star’.

We’re going to be looking at how Keats’ idealistic poetry grapples with the conflict between the transient and eternal, whereas Campion’s realist film makes a purely physical examination of love and death.

The Grecian Urn is actually filled with quotes all the way through so for our example we can just use the first line of the poem:

This is referring to an image of a woman on the Grecian Urn that Keats is describing.

He’s describing how the urn has her stuck in a moment of her life, but we’ve also got these connotations of the eternal nature of this woman through the words ‘still’ and ‘quietness’.

In contrast, he also uses the word ‘unravished’. The word ravished sort of brings in these sexual connotations of love, sexuality and virginity. These are seen as things that are inherently very transient.

In the case of the urn, however, the woman’s state as ‘unravished’ is captured for all time.

I think it’s interesting because, if we really look at it, we’ve got a juxtaposition between the impermanent state of being unravished and the stillness and quietness of the eternal woman painted on the urn.

So what does this actually tell us? What’s the effect?

Keats is trying to reveal the constant struggle between something eternal and transient.

Through this juxtaposition, he is attempting to say: “maybe we can capture these transient moments for eternity?”

While some things are so fleeting, they may be perpetuated for long into the future in other forms, such as art on an urn.

While Keats focuses on the physical and temporal aspects of love and death. Campion the director of ‘Bright Star’ is using more of a psychological realist way to explore those ideas.

They come to different conclusions in regard to the relationship between transience and permanence, and this can be contrasted within your analysis.

In Bright Star, we’ve got a recurring motif of a butterfly that occurs throughout.

So, think about, what is a butterfly? A butterfly grows from a caterpillar, which is a kind of ugly bug, and then it dies quickly. A butterfly is really a symbol of transience.

Technique: Butterflies as a symbol of transience

It’s also a symbol of beauty that we might want to hold onto and capture and unfortunately can’t.

In ‘Bright Star’, the character Fanny owns a butterfly farm. and she’s constantly trying to catch them. 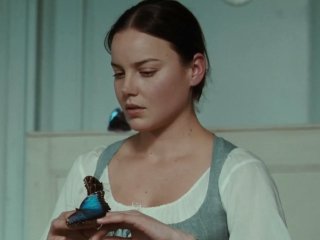 So here is where we get into the meaning within this example from ‘Bright Star’ and how this compares to Keats’s poem.

In ‘The Grecian Urn’, the depicted woman is still unravished and permanence is a possibility, the outcomes that we see in ‘Bright Star’ are not the same.

At the end of the movie, Keats dies. Basically, what’s expressed at the end of the film is that life is finite, and this finitude is tragic and unbearable for humans to deal with.

This contrasts with the optimism Keats holds in his own poem of the possibility of capturing transience.

In Keats poems, we see finality as something that’s held off. We see the moments captured. In Bright Star, what we see is the finality of death in all its ugliness.

This can be seen in the imagery that really comes through when Fanny discovers Keats death.

In ‘The Grecian Urn’, there is a great sense of beauty that’s captured and expressed, but, there’s really a lack of emotional resonance.

This is so different from Bright Star, where ultimate death and emotional honesty are key to its take on finality.

What we really see here is this nice contrast between the two texts, in terms of the different outcome and the different take they end up having on these similar ideas.

There isn’t some formula you need to follow when writing this as an essay.

Now that could be a paragraph structure you choose to use. Equally though, we could go, “Keats, Keats, Bright Star, Bright Star”

In both cases, what’s going to matter is how effective we are in connecting and comparing the two. Regardless of our structure.

We’ve got your back with our small classes and 1 on 1 English tutoring sessions!

Brooklyn and Rowan lead our HSC English classes at our campus in Hornsby and we’ve got an incredible team of 1 on 1 tutors who can also support you!

To find out more and get started with our HSC English classes or one of our inspirational tutors and mentors get in touch today!